The introduction of single site catalysts and multiple reactor technology allows the design of new Polyolefin resins with improved properties for each particular application, and the Chemical Composition Distribution (CCD) has become the most discriminating microstructure parameter in these polymers. The proper analysis of the CCD necessarily requires a fractionation process, typically done according to crystallizability; existing analytical techniques like Temperature Rising Elution Fractionation TREF 1 and Crystallization Analysis Fractionation CRYSTAF 2-4 have shown in the last years to be of great value in the polyolefins industry. Although analytical time has been reduced to a few hours per sample in both CRYSTAF and TREF, a faster method without sacrificing resolution was required, which ended in the development of a new technique known as Crystallization Elution Fractionation (CEF) 5.

CEF was introduced in 2006 at the 1st International Conference on Polyolefin Characterization (ICPC) in Houston, TX 6. CEF combines the separation power of CRYSTAF in the crystallization step with the separation achieved in TREF during the elution cycle. CEF has been shown to be superior to both TREF and CRYSTAF and is capable to provide very fast analysis of the composition distribution of polyolefins for high-throughput applications 7.

Once completed the cooling cycle, the flow is interrupted and the column heated for a few minutes at a temperature, Td , where all components would be dissolved meanwhile remaining in the column; if applying a solvent flow, Fd, at this step to elute the components out of the column they will be separated according to CRYSTAF mechanism. To maximize resolution power in DC, analytical conditions need to be optimized as described in previous publication 7. CEF, DC and TREF experiments were performed in a specially developed bench-top instrument. As the interest of CEF technology is focused not only on classical Chemical Composition Distribution measurement but also on high Throughput Analysis, the instrument was built incorporating an autosampler with capacity of 70 vials of 10 ml.

The CEF instrument diagram is quite simple as shown in Figure 2. The autosampler dissolves the sample in o-dichlorobenzene and it is loaded into the injection valve loop through the syringe dispenser.  The sample is injected with the pump flow into the column head and the DC process begins at a given cooling rate and crystallization flow. As the crystallization ends, the oven starts the heating program and flow is adapted to the elution flow to obtain the CEF analysis passing through the column to a dual wavelength infrared detector, so concentration and composition can be measured at once. A dual capillary viscometer detector can be added to the system to measure the composition – molar mass dependence. The extended separation between peaks in CEF over TREF (8ºC) corresponds to the extra DC separation (present in CEF only), that at a heating rate of 2ºC/min results in 4 min separation time, which at an elution flow of 1 mL/min corresponds to an extended volume separation of 4 mL indicating that the DC process deposited the fractions (colored spots in Figure 3) of the column empty volume, separated 4 mL one from the other.

Resolution in CEF is quite superior to TREF as shown by the baseline between peaks being closer to zero in CEF. Figure 3. Comparison of CEF and TREF analysis of a blend under similar analytical conditions.

The CEF analysis can be advantageous over TREF to improve resolution, as in Figure 3, or to speed up analysis for high-throughput operation achieving same resolution power but at a significant shorter time than TREF.

The use of a two heated zones autosampler, where samples are being prepared (automated vial filling and dissolution) to be injected into the CEF column, in combination with high-speed column technology, allows the analysis of samples every 25 minutes or 50 samples per day, at a crystallization rate of 5ºC/m and heating rate of 10ºC/m.

The reproducibility of the technique is extremely good as shown in Figure 4 with ten consecutive analysis of the same sample placed in different vials. Figure 4. Analysis of 10 samples in different vials of a multi-reactor resin. Analysis time per sample 25 minutes.

A new approach to measure the Chemical Composition Distribution in polyolefins has been developed “Crystallization Elution Fractionation” (CEF) which is superior in resolution, speed and hardware simplicity over existing TREF and CRYSTAF techniques.

CEF is well adapted to high-throughput analysis in combinatorial chemistry tools being capable of analyzing samples with reasonable resolution in less than 30 minutes.

The analytical power of CRYSTAF and TREF together in a single instrument for a full Chemical Composition Distribution characterization. 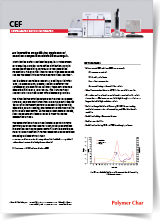 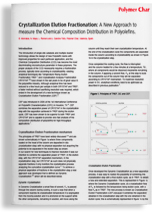 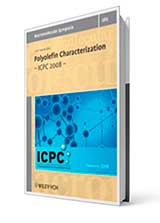 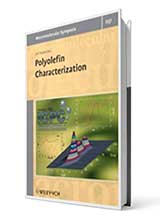 Poster: Improvements in Sample Preparation of Polyolefins to prevent Polymer Degradation prior to GPC/SEC and CEF analysis

Poster
Presented at the 4th ICPC
2012