Home » Blog » Short-chain Branching in polyolefins: what causes short-chain branches and how to study them.

Short-chain Branching in polyolefins: what causes short-chain branches and how to study them. 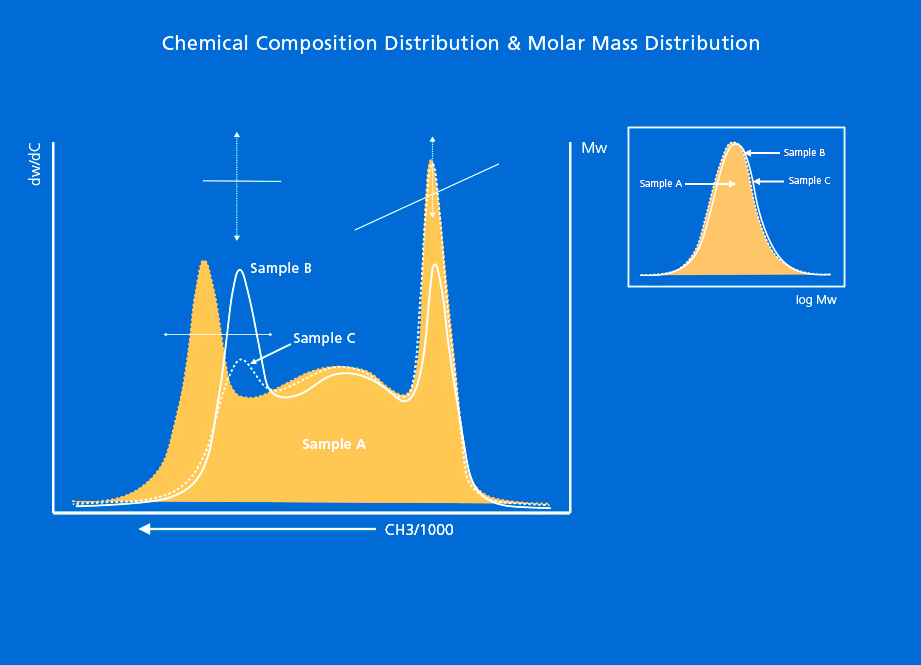 In the case of linear low-density polyethylene (LLDPE), the incorporation of the comonomer in the chains is not uniformly distributed in all the molecules of this resin. Due to the size differences between the comonomers and ethylene, and to the multiple-site-type nature of Ziegler-Natta (coordination chemistry)-type catalysts used in the manufacturing of LLDPE, the Chemical Composition Distribution (CCD) of these resins is quite peculiar, showing a bimodal microstructure as depicted in Figure 1: 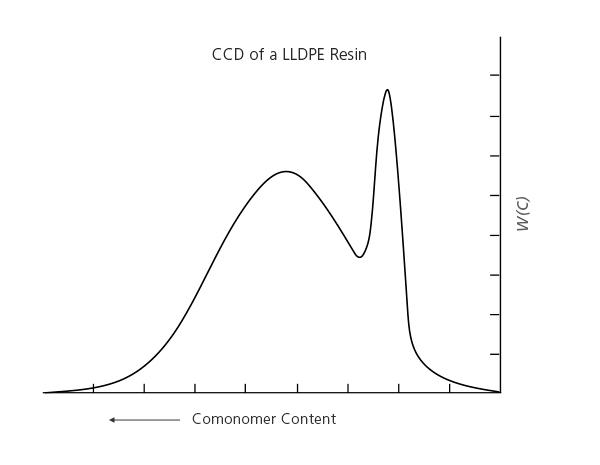 To define the structure of an LLDPE resin in terms of composition, it is necessary to study the full Chemical Composition Distribution curve, instead of the average composition parameter that results from measuring the polymer’s total density, or the average number of short-chain branches along the Molar Mass Distribution curve. The structures of all  Ziegler-Natta-type polyolefin copolymer resins, from LLDPE to HDPE, can only be uniquely defined by their chemical composition and molecular weight distributions.

Read more about the importance of analyzing the chemical composition distribution in polyolefins.

In the case of low-density polyethylene (LDPE) – which is produced by a free radical polymerization process – short-chain branching is still not homogeneous, as shown in Figure 2. The microstructure of LDPE resins is the least defined and most complex of all polyolefins. Intramolecular chain transfer (back-biting mechanism) results in the presence of short-chain branches (mainly ethyl and butyl), and inter and intramolecular chain transfer reactions result in long-chain branches of similar size to the main chain that are responsible for the high melt-strength of these resins.

The reaction of ethylene with functional monomers to produce ethylene vinyl acetate and ethylene acrylic acid also requires the determination of the Chemical Composition Distribution for branches and functional groups. 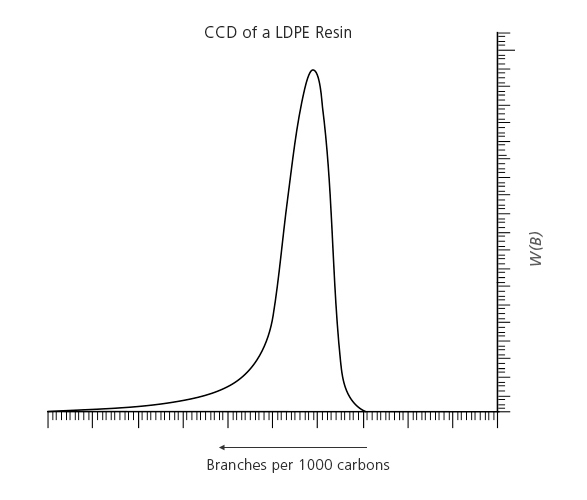 Polypropylene (PP) homopolymer resins can be produced in various configuration forms that result in crystallinity changes. As a result, polypropylene samples can be classified according to their tacticity as isotactic, syndiotactic, or atactic. These tacticity variations affect the polymer’s crystallinity just as the addition of comonomers do. The same techniques used for studying the Chemical Composition Distribution are also sensitive to these tacticity variations.

The addition of small amounts of ethylene to the polypropylene chain will result in propylene-ethylene copolymers. These changes in composition will affect the regularity of the chain, which will be clearly reflected in their CCD curves.

The addition of ethylene as a comonomer will perturb the polypropylene’s chain regularity, decreasing its crystallinity. This gives rise to a true CCD in the case of ethylene-propylene copolymers, in this case expressed in terms of comonomer fraction, instead of short-chain branches.

How to study Short-chain Branching

Short-chain branches have a direct effect on sample regularity and crystallinity, therefore, Chemical Composition Distribution techniques are the main tool for studying them.

The CCD is more important than any other microstructural feature in certain types of polyolefins such as LLDPE and heterogeneous EP copolymers, as explained in Importance of CCD in polyolefins.

Information about short-chain branching can also be obtained with the GPC/SEC technique using an on-line infrared (IR) detector with at least two interference filters; one filter for measuring the overall absorption of the C–H region, and another filter  for measuring the absorption of the C–H from the methyl groups. These IR detectors inform about the comonomer incorporation (short-chain branches) in polyolefin copolymers by measuring the number of methyl groups per 1,000 carbon atoms (CH3/1000C).

In GPC/SEC technique, as the separation is performed according to molar mass, the SCB results obtained will be the average short-chain branches for each molar mass value along the Molar Mass Distribution (MMD). This information becomes critical when differentiating resins that have the same MMD profile but a different incorporation of short-chain branches, as this may result in different behaviors when used for a certain application in a finished product.

CRYSTAF and TREF Encyclopedia of Analytical Chemistry. B. Monrabal