Preparative fractionation in a column packed with inert support is a long used technique for the characterization of polyolefins as it facilitates the analysis of the fractions to obtain the bivariate distribution of a resin.

For decades, fractionation has been an important but challenging and tedious technique because it requires the manual handling of large volumes of toxic solvents at high temperature. The significant amount of time and effort demanded for the operation called for an automatic instrument that avoided solvent handling by the analyst. This resulted in an automated technique that was able to fractionate polyolefins according to their chemical composition (by Temperature Rising Elution Fractionation (TREF) or by Crystallization Analysis Fractionation (CRYSTAF), or according to their molar mass. However, with these methods, fractionation takes place with the absence of a support, and it has started to become evident that for some polymers, when fractionating by TREF, a support for the solution to adhere to is critical for a good separation of the fractions, as is the case of newly developed multiple reactor-catalyst resins.

A preparative fractionation instrument has been developed to fractionate up to 20 grams in a packed column. A significant effort has been devoted to automate the whole process from sample dissolution and column loading until the fraction collection. In a first stage, the instrument is used to fractionate by TREF. By adding the column as support for the solution to crystallize, the separation for each of the fractions is improved for those types of new resins discussed above. 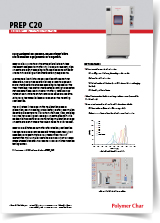 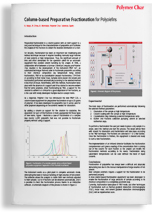